I still remember the feeling I had driving toward Sedona on Highway I-17 going north from Phoenix, leaving around midday and making some stops along the way. It was a beautiful bright day, somewhat cool, and it was so very different from what I am used to in south Florida where the farthest you can see is maybe a mile or two due to the flatness and vegetation. Moving around in Arizona always produced a feeling of expanse where you could see for many miles unless the road was winding through some pass between hills or mountains and even that gave me the sensation that there would be something interesting just around the bend. 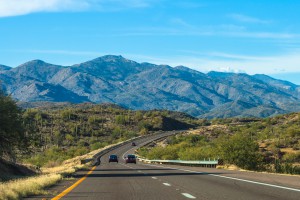 In the afternoon, having stopped off at a couple of places just to take a break and look around, like Cordes Lakes at the junction of Highway 69, and not having stopped at other interesting sounding locations such as Agua Fria National Monument and Montezuma Castle National Monument, I came to the junction of Highway 179, which heads west and then north toward Sedona.

Although the terrain had been changing all along, the change just after starting on 179 was more pronounced. After a couple of miles, going past dry creek beds and broken terrain, the scene below came into view. 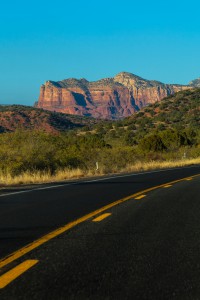 After a few minutes, about 5 miles from the junction, I saw the sign for the Red Rock Ranger District station and turned in. The road winds into the parking area and you get to see Bell Rock and Courthouse Butte toward the north (the Two Nuns can be seen at the right edge of the butte in the background).

I took a walk around in front of the ranger station, which had a viewing area on the north side with a green railing all around.  The trees in the area just beyond the rails spread out to make a nice contrast with the buttes in the distance.  This is where I took the image above. This was the most striking view which, I’m sure, is why the viewing area was on this side. I had heard a little about Sedona, mostly from a couple of people I met at Mesa, who had recommended it, in fact insisting that I should not miss it. So when I saw the scene above I started understanding what they were talking about.

After a little while taking in the beauty but needing a break from the cold (not sure if it was the altitude, the lateness in the day, or both but it was about 25 degrees colder), I went inside the ranger station into a warm open space to speak to one of a few rangers at the large information desk.

There were other people who had come in to the station, I’m sure for the same reasons and probably to ask the very same questions. After waiting a few minutes I spoke to a very helpful ranger who provided a good rundown (no doubt he had been answering these questions many times a day), letting me know about locations that I would not want to miss, how to get there as he showed me on a small map, as well as pointing out that I was running out of time if I wanted to take any pictures around sundown. So off I went in a hurry, map in hand, wishing I had started out earlier that day to have more time in this beautiful place.

Part 2 of this will be coming, hope you stop by and take a look. You can also take a look at my previous article about Arizona’s Wide Open Spaces and see all my Arizona images.

All photographs, text, and video on this or any of my pages are:
© COPYRIGHT EDWARD GLEICHMAN, ALL RIGHTS RESERVED (**unless otherwise noted), are not in the public domain, and may not be used for any purpose including websites, blogs, or in any other media, without express written permission from Edward Gleichman.

**You must request permission for use from any other owners as noted.